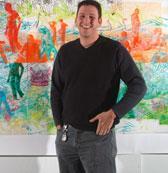 Daniel Heyman is a painter and printmaker in Philadelphia. He is a 2010 Guggenheim Fellow in fine arts and a 2009 Pew Fellowship in the Arts recipient.

To create the body of work in “Bearing Witness, Heyman sat in on interviews between human rights lawyers and dozens of former Abu Ghraib Prison detainees. While the men opened up
about the atrocities they had suffered, Heyman drew their portraits and interwove excerpts of their
testimony onto engraving plates or sheets of paper. He conveys their horrific experiences with artistic sensitivity and great respect. His work also explores the Iraqi war and the U.S. war on terrorism from different perspectives.

About his work, Heyman writes: “For many people the visual arts is supposed to be a purely pleasurable experience. Visiting art galleries or museums one decision among many in a plethora of entertainment options, choices we often mistake for culture. Painting exhibitions are judged a success by the number of people that move in and out of them, and rarely by the reflective discussions that they engender concerning contemporary society. Artists and art institutions play along, either presenting works we already think we know so the pleasure of recognition becomes the “art” experience – (think the recent Hopper exhibit in Boston), or presenting works of sumptuous, glamorous or carnival affect generating lots of oohs over work that holds very little long term attention. This art makes everyone happy. Or does it? Would we be happier had Robert Mapplethorpe not exhibited beautiful self portraits that stared a too young death from AIDS in the face and challenged us to take this epidemic seriously? Who would have wanted Picasso not to paint Guernica as an indictment of fascism? Too rarely, a work of visual art can break through the complacency of our lives and bring to us vital information that is not a question of beauty in the traditional sense, but that reveals a larger and much more important role of the artist in society -- one that does not coincide with a present fixation on coordinated colors or styles in a tableaux of good taste, but rather holds up a mirror to our collective face and asks "Is this who we want to be?" At that point, it is how we recognize ourselves and what we do about who we are that creates the art.”