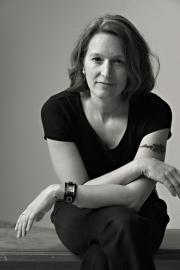 Molly Sturges is a composer, artistic director, and performer. She is best known for her work integrating intermedia performance, community dialogue, and social and environmental equity and healing. Projects include working as guest artistic director with The Creative Center: Arts for People with Cancer, in NYC for a five-month project with women living with cancer; creator and director of Moment, a four-month intergenerational project with homeless older adults and students for The European Union Festival of Culture in Cork, Ireland, 2005; and Memorylines: Voces de Nuestras Jornadas, commissioned by The Santa Fe Opera and The Lensic Performing Arts Center which brought people together, ages 8 to 87, across economic and cultural lines in Santa Fe to create an original new opera dealing with identity and immigration. Aside from being the co-founder and artistic director for Littleglobe, Sturges has been an artist in residence with a wide range of communities doing short-term creative arts projects involving arts and health including a residency at ARC cancer support center for The European Union Festival of Culture 2005 and nursing homes in the US and Ireland.

Current projects include Lifesongs, a partnership with The Santa Fe Opera, writing music with elders in hospice and nursing homes to be performed by the UNM chorus; artistic director for Common Ground: TOC, a community capacity and arts project with intergenerational participants from two Eastern Agency Navajo communities and from the rural village of Cuba, NM; composer and director for Salve, a intergenerational music project exploring the effects of war on individuals and families based upon interviews with returning veterans; and creator/composer/writer for COAL, a large-scale national music and community engagement project.

Sturges is also a performing vocalist, recording artist, and leader of creative music ensembles. A recipient of numerous commissions and residencies, she has written and performed original music for a wide array of projects including music for dance companies, silent films, circuses and sound installations. Her ensemble, mJane, has received public acclaim for the release of their first album Prayers from the Underbelly on Pax Recordings. Sturges holds an MA in composition from Wesleyan University. She has lived and worked in Kenya, Senegal and the Lakota community of Rosebud, South Dakota. She was previously the Director of Education at The Center for Contemporary Arts in Santa Fe, a project collaborator at The Art and Science Lab, and has worked extensively as an educator, lecturer and facilitator both abroad and in the United States. In 2008 Sturges was awarded the United States Artist Fellowship in Music (unitedstatesartists.org). Since 2010 Sturges has been a Professor of Practice in the Art & Ecology program at The University of New Mexico.

In addition to art-in-community and music projects, Sturges has been a devoted student and teacher of meditation for over fifteen years.