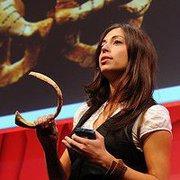 Naomi Natale is an installation artist and photographer. She was the founder and director of The Cradle Project, a large scale installation calling attention and raising funds for the 48 million children orphaned in sub-Saharan Africa. Over 550 cradles were created and donated by artists from around the world who were drawn to Natale’s vision. All 550 cradles were shown in one exhibit which had over 6,000 viewers. A catalogue, The Cradle Project, highlights over 75 of the cradles which were a part of the exhibition. Naomi has received numerous awards, including the prestigious TED Global Fellowship (2009), and the Professional Achievement Award from the School of Arts and Humanities at Richard Stockton College of New Jersey (2009). Naomi has served as an artist-in-residence at Columbia College of Chicago in 2008, 2010 and 2011. She speaks internationally on the topic of art and activism as well as her installation works and is currently both a TED Senior and Carl Wilkens Fellow, respectively.

Her current project is One Million Bones which uses education and hands-on art making to raise awareness of genocides and atrocities going on around the world. In the spring of 2013, One Million Bones will take 1,000,000 handmade bones made by artists, students and activists, and install them on the National Mall in Washington D.C. as a reminder of the millions displaced and suffering from historic and on-going genocides, mass atrocities, and to call upon our government to take much needed and long overdue action.