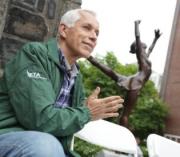 Cuban-born José Mateo is founder and artistic director of José Mateo Ballet Theatre, one of America’s leading producers of new ballets, and the area’s most innovative school for quality ballet training. Now celebrating its 25th Anniversary, José Mateo Ballet Theatre’s highly acclaimed Company is presenting 50 performances in 5 distinct programs representing 25 years of Mateo’s artistic achievement in choreography. The School offers an innovative model for a high-quality academy with a humanistic approach to ballet training that fosters diversity and inclusion. Mateo is also widely respected for his civic contribution as innovator of community programs that broaden the reach of ballet and make dance an effective community building force. He is the originator of Dance for World Community, a project that builds local and global networks to expand the role of dance in communities locally and beyond. He is the producing director of the project’s Annual Festival that demonstrates “the power of dance to create social change”. The 2nd DWC Festival in June 2010 presented 50 local performance groups, provided free classes in diverse dance forms, and featured 30 social service agencies doing advocacy around diverse civic, environmental and social issues. Mateo holds a BA in Art History from Princeton University where he began his formal training in ballet and modern techniques. After a New York-based career as a dancer, Mateo moved to Boston where he worked as an administrator at Harvard University’s Fogg Art Museum and quickly gained a reputation as a teacher and choreographer. José Mateo Ballet Theatre’s presentations of his choreographic works have been recognized alongside international touring companies in The Boston Globe’s “10 Best Dance Events” in 1990, 1995, 2001, 2002, 2003, 2004, and 2008. He is also a two-time winner of the Massachusetts Cultural Council fellowship in Choreography. Based on his past and anticipated future civic contributions, in 2005 Mateo was named to the inaugural class of Barr Fellows by Barr Foundation. Mateo has served as a Director on the Boards of the Boston, Cultural Council, the Cambridge Arts Council, Arts/Boston, Boston Dance Alliance, Dance Umbrella, and the Victoria Rowell Foster Children’s Positive Plan. He is currently on the Advisory Board of Finca Vijia Foundation and serves as the Treasurer of the Cambridge Arts Council Fund.