A Thousand Artists: A Public Art Making Installation at the Presidential Inauguration 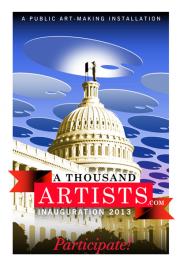 A Thousand Artists is part of a campaign for the making of art everywhere by everyone.

A Thousand Artists is a public art-making installation on the Washington Mall, which will occur on January 20 and 21st 2013.

Artist of all kinds, painters, sculptors, radical knitters, dancers, collage artists, print makers will descend on Washington D.C. to document and reflect on the presidential inauguration. It will be a beehive of creativity. We'll demonstrate the power of art and its practice, with no partisan political motivation to our presence. We'll make a statement for art, for it's importance to democracy and community.

On the day before the inauguration in Washington DC, there will be sightings of people in white jumpsuits and orange hats making art everywhere – at the hotels, monuments, museums and tourist attractions.

Andrew Purchin created a painting at the inauguration of President Obama in 2009 and has created paintings as close as he could get to the Republican National Convention and the Democratic National Convention in 2012 all the while campaigning for the making of art by everyone.

Purchin is encouraging everyone to make election day be “Vote and Make Art Day.” Please make art of any kind for at least five minutes as close as you can to your polling place on November 6th of this year. Spread the word!.

You can post photos or videos of your art making experience on our Facebook page “1000 Artists: Presidential Inauguration 2013.”

American politics would be vastly improved if every American had an art making practice, of some kind, which could last for as little as five minutes a day. Every American then would have a daily practice of reflecting and innovating.

A Thousand Artists sets a standard for citizens to engage in the skills of art making which include: receptivity, empathy and innovation.

What we do at the inauguration sets the tone for the next four years. We are prioritizing creativity, democracy and open non-judgmental communication across differences.

The practice of art making is nuanced and can bring people together and thus is an antidote to our polarized society.

The Making of Art is the Ultimate Democracy.

Creativity scores have been dropping over the last 10 -20 years. "Newsweek" magazine August 2010 article on the “Creativity Crisis” alerts us to an alarming trend: since 1990, scores measuring the creativity of American children have declined annually.

When multitudes of people create art in public, more people will want to make art, and the more people engaged in the making, the more they become active, creative, and engaged citizens.