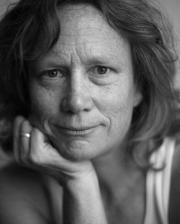 Jennifer Monson has been pursuing an original approach to experimental dance forms in NYC since 1983 when she graduated from Sarah Lawrence College. In that time she has created a wide body of work that incorporates well-developed collaborative relationships with many artists including Zeena Parkins, Kenta Nagai, DD Dorvillier and Yvonne Meier. Her solo work has been presented at many venues in the U..S, Australia, Europe, Latin America, and Tanzania. Major works in the past 10 years include The Pigeon Project (2000), The Glint (1998), Sender (1997), La Mer (1995), Tackle Rock (1993), and Ursa's Door (1990). Her project BIRD BRAIN (2000-2008) includes the theatrical work Flight of Mind (2005) and four migratory tours: Gray Whales (Spring 2001), Ospreys (Fall 2002), Ducks and Geese (Spring 2004), and Northern Wheaters (Fall 2010). Each tour provides over 30 free outdoor performances, and covers routes from Mexico to Canada, from Maine, through Cuba to Venezuela, from the Gulf of Mexico to Canada, and from the Arctic through Europe to West Africa. In 2007 she completed a year-long project iMAP/Ridgewood Reservoir on the border of Queens and Brooklyn and is currently working on the Mahomet Aquifer Project in Central Illinois.

Monson has received a Guggenheim Fellowship (2003), a Foundation for Contemporary Performance Art Fellowship (1998), the Lambent Fellowship in the Arts (2007), the National Endowment for the Arts Choreographer's Fellowship (1989, 1992, 1993-95, 1995-97), and the New York Foundation for the Arts Artist's Fellowship (1989, 1998, 2008). Monson's choreographic achievements have been recognized by two Bessie's (New York Dance and Performance Awards), in 2006 for BIRD BRAIN and in 1997 for Sender and sustained achievement in the dance field. Her work has also been supported by Creative Time Inc, Dancing in the Streets, Movement Research, The Open Meadows Foundation, The Puffin Foundation, and the Martha Porter Fund, and, in collaboration with composer Zeena Parkins, by the Mary Flagler Cary Charitable Trust, Meet the Composer and the American Composers Forum. Her work has been reviewed by such writer/critics as Ann Cooper Albright, Sally Banes, Jennifer Dunning and Deborah Jowitt. The BIRD BRAIN Osprey Migration was reported on CBS radio The Osgood Files. The BIRD BRAIN Ducks and Geese Migration was profiled in the "One Small Step" column of the Sept/Oct 2003 issue of Sierra Magazine. The iMAP/Ridgewood Reservoir project was reported on National Public Radio, April 2007, and in Orion Magazine, April/May 2008.

Since 1985, Monson and composer Zeena Parkins have been committed to an ongoing investigation of the dynamic interplay of dance and music. Monson has also collaborated and performed extensively with Yvonne Meier and performed in the work of Cathy Weis, DANCENOISE, Karen Finley, Eileen Myles & Ellen Fisher, Lisa Kraus, Fred Holland, John Zorn, Yoshiko Chuma, John Bernd, Pooh Kaye/Eccentric Motions, and Jennifer Miller's Circus AMOK, among others. For several years she curated two dance/music improvisation series in New York City (Hothouse at Performance Space 122 and Dive-in at Danspace Project at St. Marks Church) and has a strong commitment to improvisation as a performance form. She has participated in improvisational festivals in New York, Seattle, Stuttgart, Minneapolis, Montreal, and San Francisco as a teacher, performer and panelist. Monson is a dedicated teacher to a wide range of communities in New York City. From 2002-2004 she participated in Dance Theater Workshop's Public Imaginations Program through The Neighborhood School, and incorporated the BIRD BRAIN educational resource guide into fourth grade studies as well as included a group of five students in the Flight of Mind performances. From 1996-1998 she was a NYFA Artist in Residence at The Neighborhood School where she integrated movement and music into the science/physics curriculum for the third and fourth grades; she also directed two projects with El Puente's Academy for Peace and Justice in her community of Williamsburg, Brooklyn: Brinca Charcos (1995) and THE SUGAR PROJECT (1997). Her early childhood class from Children's Liberation Daycare can be seen on the TV show "Sesame Street."