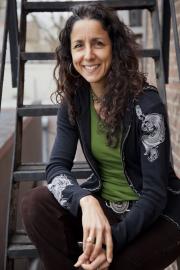 Julie Winokur is a writer and documentary film producer whose work uses the power of visual media to catalyze positive social change. Her work has appeared on PBS, National Geographic Magazine and Discovery online, as well as in The Wall Street Journal, The New York Times Magazine, The Washington Post, and MSNBC.com, among others. Her latest film, Firestorm, will air on the Documentary Channel and was nominated for a Northern California Emmy Award. Her passion for social advocacy has produced multi-year projects including the one-hour film Aging in America: The Years Ahead, and its companion book and traveling exhibition, as well as Denied: The Crisis of America’s Uninsured, which won the Jury Prize at the Media That Matters Film Festival and was featured on MNSBC.com. Winokur’s dynamic approach to documentary filmmaking drove her to turn the camera on herself in the short film The Sandwich Generation, in which Winokur and her husband, photojournalist Ed Kashi, chronicled their personal challenges caring for their two children and Winokur’s aging father. The film has been featured on MSNBC.com, AARP.org, MediaStorm, Good Morning America, The New York Times website, in National Geographic Magazine, and has been solicited by various organizations for community outreach and education on caregiving. In 2008, Winokur completed India’s Fast Lane to the Future, a short film documenting India’s new national highway and its impact on the population. Curse of the Black Gold, also produced in 2008, is a short-form multimedia video exposing the enormous costs and devastating impact of oil exploitation in the Niger Delta. Curse of the Black Gold won First Place Multimedia at the 2008 New York Photo Festival Awards and has been featured at The George Eastman House International Museum of Photography and Film, and The Open Society Institute, as well as on various websites including CNN, NPR, Slate, and The Atlantic Monthly. Winokur has recently produced short films for Oxfam, Civic Ventures and the James Irvine Foundation. Currently, Winokur is working on a political-themed multimedia project titled "Bring it to the Table." (www.bringit2thetable.org)