What I Want My Words To Do To You 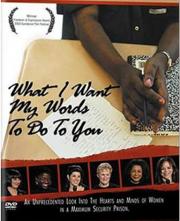 “What I Want My Words To Do To You” offers an unprecedented look into the minds and hearts of the women inmates of New York's Bedford Hills Correctional Facility. The film goes inside a writing workshop led by playwright and activist Eve Ensler, consisting of 15 women, most of whom were convicted of murder. Through a series of exercises and discussions, the women delve into their pasts and explore the nature of their crimes and the extent of their own culpability. “What I Want My Words To Do To” You documents both the wrenching personal journeys undertaken by the inmates to find the words that tell their own stories, and the power of those words to move the outside world. In 1998, Obie-winner Ensler first visited the Bedford Hills Correctional Facility for Women. While she had long devoted her artistic and activist energies to helping homeless women and survivors of violence around the world, she had never before come into contact with women in prison. Ensler, who had previously taught at the university level, volunteered to be a writing instructor at Bedford. She quickly established powerful connections with the inmates. Ensler's method is not to distract the prisoners from their situation, but to ask them to go deeper into its causes, details and consequences. Ensler, known for her ability to get women to talk about things that would normally go unspoken, began her work at Bedford by creating a safe and contemplative environment for the women to explore the circumstances that had led them to prison. The writing group members confront the lives they've ruined, the families left behind and their own lives as they might have been. Gary Sunshine and film editor Madeleine Gavin structured "What I Want My Words To Do To You" around the writing exercises that Ensler had assigned to the inmates. The exercises appear deceptively simple at first: inmates are asked to "Tell the facts of your crime." As the film progresses, the process of writing itself becomes a process of discovery and self-reflection. The inmates face painful truths about the choices that irrevocably changed the course of their lives. The filmmakers use the exercises — and the highly charged discussions they trigger — to reveal how much the women grapple with their own guilt. What resulted is a writing community that has flourished for over five years and continues to this day, due in large part to the remarkable trust the inmates place in Ensler. It has given rise to several theatrical performances of the inmates' writing, arranged by Ensler and playwright Gary Sunshine, that have been presented at the prison and at various other venues, including a benefit at Lincoln Center's Alice Tully Hall. A group of the country's top actors, including Mary Alice, Zoe Caldwell, Glenn Close, Ruby Dee, Hazelle Goodman, Marybeth Hurt, Phylicia Rashad, Rosie Perez and Marisa Tomei have donated their time and talent to these performances, some of which have raised significant funds for the prison's college education program.

What I Want My Words To Do To You Movie Trailer